The Mimosa hostilis comes from a tree locally known as Jurema, Jurema Preta, Black Jurema or Vinho de Jurema and is the most desired part of the plant known by the local Shaman for its entheogenic properties.

Mimosa originates from Brazil where it has also been used for centuries for various medicinal purposes.

The inner part of the root contains the most of the active alkaloids, this is also the part of the Mimosa plant that we offer here at Avalon Magic Plants. In the western world, Mimosa is often used in  as a substitute for other plants such as Psychotria Viridis or Chaliponga.

Although the term Mimosa Hostilis tree is still used quite often, the newer scientific term mimosa tenuiflora is also used to describe this root bark. The two names are used for the exact identical products.

Mimosa hostilis is the former scientific name for Mimosa tenuiflora, and the two names are synonymous.

The older name is still widely know due to its presence in the literature and as distributers of botanical products still use the older term. M. tenuiflora is an entheogen known as Jurema, Jurema Preta, Black Jurema, and Vinho de Jurema.

This product is not sold or intended for the purpose of human consumption.

This is a botanical specimen of ethnographic value and interest, and is delivered with no expressed or implied application or purpose.

This is also why the tax on this product is the 21% non-food tax as opposed to the 9% tax on herbs meant for consumptionTo date no β-carbolines such as harmala alkaloids have been detected in Mimosa tenuiflora decoctions, however the isolation of a new compound called “Yuremamine” from Mimosa tenuiflora as reported in 2005 represents a new class of phyto-indoles.

The Jurema Preta that we offer is imported directly from Brazil and new loads arrive every month, so you can be sure that the product is of high quality and always fresh.

Another completely unrelated use for this plant comes from Mexico, where the bark of the tree is known under the name Tepezcohuite.

Mimosa Hostilis dates back to Pre-Columbian Mexico where it was used to treat wounds and known for its healing properties.

It continues to be a favorite ingredient for treating a variety of skin conditions, including scars, acne, psoriasis, sunspots, and other conditions that have damaged the skin. The benefits of mimosa hostilis are well documented.

Mimosa Hostilis inner root bark is a rich source of nutrients and minerals that are good for your skin. Some of these include tannins and flavonoids.

Flavonoids play an integral role in helping to protect against aging by increasing the skin’s ability to absorb additional nutrients and minerals.

Greater skin permeability allows your other skin care products to penetrate deeper into the lower layers of the skin. Other key ingredients in Mimosa Hostilis Inner Root Bark include medicinal elements such as copper, iron, magnesium, and zinc.

These ingredients play an important role in cell restoration as well as protecting the skin, and restoring the production of collagen. Mimosa Hostilis contains natural scrubbing, exfoliating and regenerative properties and works as a gentle cleanser for all the skin types. You can expect to see immediate results right after a single use in the form of brighter, smoother, and more vibrant skin. – Valencia-Gómez LE, et al. Int J Biol Macromol. 2016. 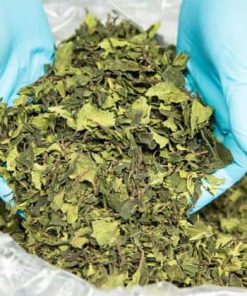